Samara Burton received this scholarship. Listen to what she had to say.

Awarded to students beginning their studies in any program directly from high school who are either Nova Scotia residents of Caribbean descent, or applying from the Caribbean. 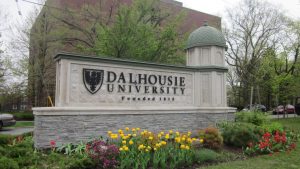 Revd. Trevor A. Phillips was born in Jamaica on March 5, 1941. He received his early education at Kingston College and Union Theological Seminary in Kingston. He was an Ordained Minister at Mount Zion United Church in Jamaica before migrating to Canada. From 1969-72 he continued his pastoral work in Prince Edward Island. Revd. Phillips moved to Nova Scotia and worked at St. Paul’s United Church in Halifax from 1973-1981, and then Sambro-Parkhill-Jollymore Pastoral Charge from 1981 until his passing in 2008. He obtained degrees at the University of Prince Edward Island (BSc), St. Mary’s University (MEd) and Dalhousie University (BEd 1975 & MA Education 1980) Science, Education, Educational Psychology, Counselling, Educational Administration and Supervision. During his career he was a teacher and guidance counsellor at several schools within the Halifax Regional School Board and a member of their Crisis Intervention Team. He was also a presenter at several national and provincial conferences delivering workshops on multi-culturalism, human rights, curriculum reform and discipline strategies. Revd. Phillips was a man of excellence with great passion for life. He was an avid sportsman who enjoyed badminton (at Dalplex with the “Silver Tigers” Table Tennis), cricket and jogging. His compassion and dedication to Christian Ministry, counselling within the community and caring for people in need was extensive and extraordinary. His amazing laughter and sense of humour brought joy to many lives. He was a legend in his time. On Eagles’ Wings is an autobiographical account of his life and faith. The Revd. Trevor Phillips Memorial Scholarship was established as a “living” memorial so that his name and his excellence will be remembered in a significant way.

Hear From A Recipient of this Award

More Episodes for You

CS2AC Episode 6: An Interview with President of Dalhousie University’s Caribbean Connection About How She Manages Being A Chemistry Major on Scholarship with A Part-time Job

CS2AC Episode 6: An Interview with President of Dalhousie University’s Caribbean Connection About How She Manages Being A Chemistry Major on Scholarship with A Part-time

The Commonwealth of Dominica, is a beautiful Caribbean island with a population  of 70,000 plus . The 29 x 18 mile island was devastated by